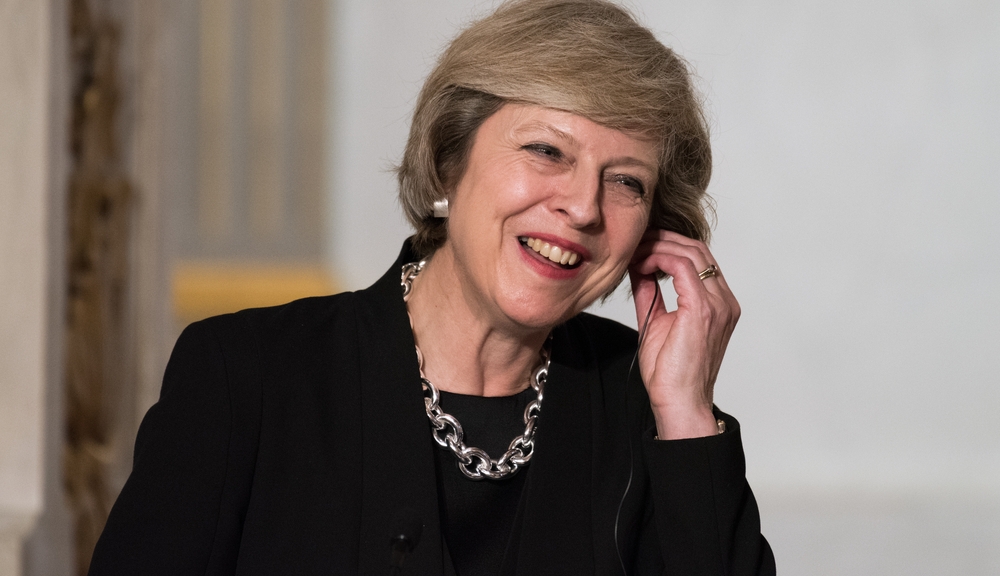 Who is Theresa May and what does she stand for? Does she represent a break from the Cameron government or a continuation of it? Can she reduce inequality in society?

This post looks at May’s background, experience, and influences, her pledge to tackle inequality, and comparisons with David Cameron.

The nation is bound together by an invisible chain. At any normal time the ruling class will rob, mismanage, sabotage, lead us into the muck; but let popular opinion really make itself heard, let them get a tug from below that they cannot avoid feeling, and it is difficult for them not to respond.

On the 23rd of June popular opinion made itself heard in the EU referendum; the working class in particular gave a tug from below that couldn’t be ignored; and Theresa May, very much part of the ruling establishment, responded with her pledge to create “a country that works for everyone, not just the privileged few.”

May realised that the vote was not just about immigration, sovereignty, and our relationship with the EU. “The muck” that we’d been led into was also inequality: a minority of people doing very nicely out of free-market capitalism and globalisation, and the majority seeing their standard of living stagnate. An inequality trend that started in 1979 under Margaret Thatcher and continued under the Cameron government’s austerity agenda from 2010. A government that May was a key part of as Home Secretary.

The path to power

Born and raised in the Home Counties of England, Theresa May grew up the daughter of a Church of England vicar and the granddaughter of a regimental sergeant major. She was educated in a state primary school then a private Catholic Convent school, followed by a state grammar and then Oxford University. She has worked at the Bank of England and the Association for Payment Clearing Services.

May began campaigning for the Conservatives aged 12, became a Conservative councillor in 1986, and then an MP in 1997, eventually rising to be chair of the party and then Home Secretary in 2010. Announcing her campaign to be Prime Minister she said “public service has been a part of who I am for as long as I can remember.”

Despite campaigning (half-heartedly, appearing rarely) to remain in the EU, May was elected unopposed to become Prime Minister following the vote for Brexit and Cameron’s resignation. Church, state, and party have all played a key role in Theresa May’s life and work. She is part of the establishment.

May’s often serious and stern demeanour, and her work ethic (“I just get on with the job in front of me”), are reminiscent of Margaret Thatcher. In her first PMQs she even delivered a ruthless put-down in the style of the Iron Lady.

The ideology of Thatcherism seems to provide a framework for her thinking. Her political speeches reference the familiar watchwords of privatisation, competition, and individual choice – the belief in markets as efficient and effective when government gets out of the way. In her pitch for PM though, she tried to soften the edges.

Here is an attempt to present a more caring approach, a ‘one nation’ Conservatism, moving away from Thatcher’s controversial view that “there is no such thing as society, only individual men and women [and families].”

This slight shift may be more than careful marketing. Mrs May’s Church of England background is associated with community, inclusiveness, and a moral framework – a sense of right and wrong. She has said that Christianity “is part of me, part of who I am and how I approach things.” Her list of “burning injustices” and pledge to fight inequality may spring from a genuine sense of fairness and community.

Some of May’s work at the Home Office (2010-2016) can be seen in this light: the creation of a Modern Slavery Act to tackle exploitation; stopping Gary McKinnon’s (alleged computer hacker) extradition to the US on health grounds; and her crackdown on police corruption and racial discrimination. For example black people are up to 30 times more likely than white people to be the subject of police stop-and-search. Addressing the Police Federation (the police trade union) she told them in no uncertain terms that “if you do not change of your own accord, we will impose change on you.”

Yet other initiatives have appeared unduly harsh. Theresa May’s immigration laws have deliberately created a “hostile environment” for illegal immigrants. The most infamous example was the Home Office “Go home or face arrest” vans driving around immigrant areas of London. It resulted in only 11 people leaving Britain and was widely criticised, including claims that the language echoed that of the National Front in the 1970s. May accepted the criticism and didn’t extend the scheme, saying it was “too much of a blunt instrument.”

May is said to be a “reluctant delegator” who likes to take her time and examine “all the angles” before committing to a course of action. One of her first decisions was to pause and re-evaluate the Hinckley Power Station project, though she later gave it the green light. The Brexit negotiations will require careful thought but they will also require effective delegation.

It remains to be seen if evidence-based policy takes priority over May’s free-market ideology, moral sense, and personal experience. Her first policy announcement, the re-introduction of selective schools, is not supported by evidence. May struggled to defend it at PMQs, relying on the  personal and narrow argument that “he [Jeremy Corbyn] went to a grammar school and I went to a grammar school, and it is what got us to where we are today.”

Champion of the working class?

As far back as 2002, when May was party chair, she understood the importance of public perceptions and the need to be seen as representing more than just the interests of Conservative members.

There’s a lot we need to do in this party of ours. Our base is too narrow and so, occasionally, are our sympathies. You know what some people call us – the Nasty Party.

On becoming PM, May set out to widen the appeal and reach of her government. Standing outside Number 10, with the muffled chants of protestors at the end of Downing Street in the background, she made a short speech. It started with a declaration of the importance of the Union of UK nations and citizens (prompted no doubt by the clear Scottish vote to remain in the EU), but at its heart was inequality with May listing several “burning injustices” that ranged across health, law and order, employment, housing, and education. The victims of these injustices were likely to be poor, black, female, young, or working class. It was this last group that May then spoke to directly.

If you’re from an ordinary working class family, life is much harder than many people in Westminster realise … if you’re one of those families, if you’re just managing, I want to address you directly…

The government I lead will be driven not by the interests of the privileged few, but by yours … when we take the big calls, we’ll think not of the powerful, but you. When we pass new laws, we’ll listen not to the mighty but to you. When it comes to taxes, we’ll prioritise not the wealthy, but you.

Some have argued that the Conservative party is actually a “coalition of privileged interests. Its main purpose is to defend that privilege. And the way it wins elections is by giving just enough to just enough other people.” In fact the speech sounded more like a Labour Prime Minister.

A break from the past?

On the face of it, this is a big departure from the previous Conservative government. However, May has been clear that “there should be no general election until 2020” because “the Conservative party was elected into government on a mandate based on our manifesto only a year ago … I think it’s important for us to deliver on the manifesto on which we were elected.”

At the launch of the manifesto in 2015 David Cameron claimed that “we are the party of working people, offering you security at every stage of your life.” Like May, this sounded very much like a Labour promise, as the Telegraph suggested: “In 16 words, Mr Cameron has basically nicked the Labour Party’s mission statement.”

Both ‘one nation’ Conservatives, both committed to the same manifesto, and both claiming to represent the best interests of working people. What’s the difference between May and Cameron? In her leadership campaign speech May gave an indication of where the difference might be.

For a government that has overseen a lot of public service reform in the last six years, it’s striking that by comparison there’s not been nearly as much deep economic reform.

On entering Downing Street two days later, May wasted no time sacking the Chancellor George Osborne. Perhaps this is the end of austerity. So what is May’s position on economic reform, austerity, and public service reform? And will it promote equality?

May’s ideas for economic reform is the subject of the next post.

2 thoughts on “Theresa May: church, state, and party”